In 1829 in Hanley (a small town about 50 km away from London) the first race between Oxford and Cambridge occurred.  Initially the idea of two friends, the first “Boat Race” took place and was raced on the same course that we are familiar with today, spanning 6 miles between Putney and Mortlake (London). Eventually becoming world renowned, the “Boat Race” became an annual event in 1845.   The Federazione Italiana di Canottaggio was founded in 1888 with the name Rowing Club Italiano, it was one of the first Sports Federations involved in the formation of the Italian National Olympic Committee (CONI). On July 25th 1892, in Turin, the Fédération Internationale des Sociétés d’Aviron (FISA)  was founded to oversee the world of international rowing.
Rowing has been an Olympic sport since the 1900 Summer Games in Paris.
Rowing perfectly combines power, flexibility and muscle endurance which, along with the harmonious and cyclical technical gesture, make this sport a fascinating and elegant activity which highlights all the psychophysical characteristics of the extraordinary human machine.
It should be noted that rowing is practiced out in the open, in nature, in rivers and lakes, and with Coastal Rowing, out in the sea.
Even though rowing has ancient origins, it is still a sport in keeping with times. Many of the technologies used to build boats and oars have their origins in aerospace engineering (composite materials) and continual studies are carried out regarding the hydrodynamics of the boats and the physical application of forces. These characteristics make rowing a very “technical” sport, a specific knowledge of the boat itself is required and the boats themselves much be adapted to the athletes. 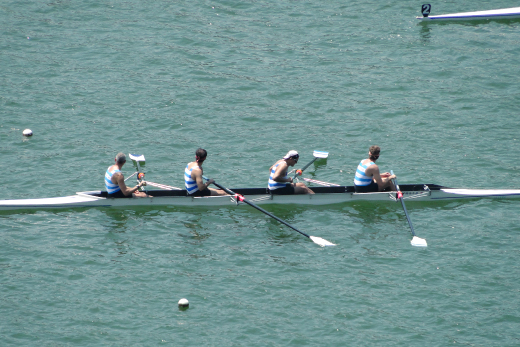